Moving While Pregnant – Can It Be Done?

The Importance Of Push Toys In Your Child’s Life

Robots and dinosaurs– what kid won’t squeal in delight with these two! Fortunately, WowWee came up with a robotic toy that combines both. Over the years, WowWee had came up with various robot toys but the Miposaur is the best by far. According to some Miposaur review, this robot toy is designed originally for kids 8 years old and up. Who would have thought that even adults and little tots love to play with them. 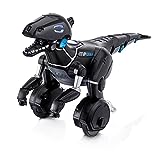 The reptilian robot, Miposaur, is as magnificent on the outside as the intricate details of its internal system. Apart from being able to sense its surroundings, its astounding responsiveness to motion commands is quite stunning. Super smart, this cool product take robotic toys to a whole new level. But what makes this robot toy truly endearing.

Meet Mippy, WowWee’s friendly Miposaur smart robot toy. Made with premium grade material painted in tech-y combination of gray and black with laser blue light, its durable and highly attractive that one look can make any geek and child drool with anticipation. Even its rubberized wheels offer excellent traction to all floor types allowing better maneuver each time. Add to that the mechanical tail that wags excitedly and you have one impressive dino-robot toy everyone loves to have.

Another exhilarating feature constantly being mentioned in various Miposaur reviews is the triple power to enjoy this cutesy robot toy. You can train, tame and play with it via hand gesture, via a downloadable app straight to your smart gadget or with a spherical trackball that comes with the package. Hand gestures offer Excited/Curious/Annoyed moods and 10 different commands like swipe, clap, wave, scare, peek-a-boo and more.
The dino-robot toy’s reaction will depend largely on the mood it’s in. Another way to enjoy robot play with Mippy the Miposaur robot toy is by downloading a free app straight to your tablet or smartphone. This app features quite a lot of gameplay. You can battle with other Miposaurs and can unlock other games as you move along. It can even make your dino-robot friend dance and follow a path you’ve drawn on the screen!

Another interesting way to control the Miposaur is via a trackball reminiscent of a Dragonball sphere. Only it does not open up to reveal anything inside. Instead, it’s equipped with the latest BeaconSense technology that features 6 different gameplay modes. The robot toy can follow it for a walk or play fetch with the trackball. It can also manipulate it to dance and do beat-box as well as “feed”. 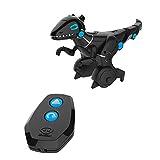 If you are one who wants to collect Miposaurs though, playing with its first-gen robot dino toy will never be enough. Luckily, getting your hands on the WowWee Miposaur RC Mini Edition Robot can be as easy as adding one to cart and then, clicking once at checkout. According to reliable Miposaur review, this mini-sized collectible offers another exciting venture in the world of dino-robot toys via its dual-action driving capabilities and top-of-the-line LEDs. They are also portable to take anywhere.

Yeah, even adults keep one in their office to while away their time when stress starts creeping in. So, what are you waiting for– get hold of these award-winning dino robots. Give it as a gift to a love one or as a present for yourself. Definitely,this is one cool robot toy everyone will bound to enjoy.